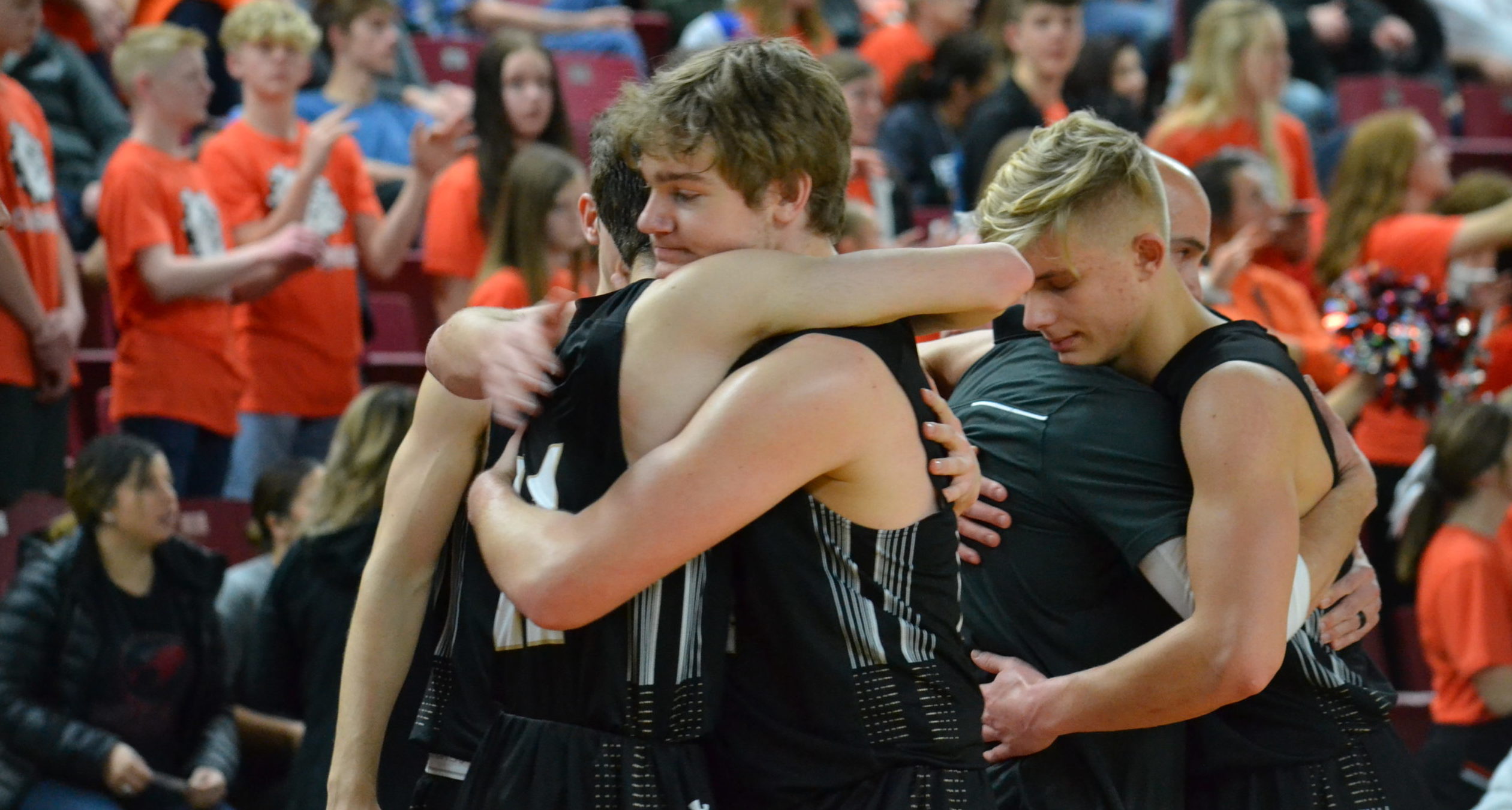 The Meridian seniors went out as brothers when their season ended Friday.

The numbers on the scoreboard said the Meridian boys basketball team lost to Cashmere, 62-56, in a consolation game at the Class 1A state tournament Friday morning, March 6, in the Yakima SunDome.

But the only number Meridian coach Shane Stacy wanted to talk about was 7. That’s the number of seniors who played their final game for the Trojans on Friday.

“Sports is a microcosm of life,” said Stacy. “You want to maximize the time you spend with loved ones. One more day would have been awesome. We just wanted another day together.”

Because it was their second straight loss in the tournament, the Trojans won’t get that opportunity. But that doesn’t mean those seven young men went out losers.

Jackson Short, Jordan Veenstra, Corey Hemenway, Ryan Johnson, Joe Plagerman and Trent Martin left a winning legacy, taking Meridian to the state tournament for the first time in 10 years and, according to amateur historians, becoming the winningest team in school history with a record of 20-11.

“This is what we’ve been waiting for all our lives,” said Hemenway of reaching the state tournament. “We wanted to change the program around, make it into a top-tier program. Being in the SunDome … it was our goal to make it this year.”

The game itself mattered, of course. The two teams battled back and forth in the first half and were tied at 30 after a Johnson free throw with 3:53 left in the half. But Cashmere scored the next seven points to take the lead for good.

The Trojans fought back late in the game to cut a 10-point deficit to 52-49 with three minutes to go, but they’d get no closer. A referee’s late whistle changed a Cashmere turnover into a Cashmere timeout to halt Meridian’s momentum and the game and season ended soon after.

Short led Meridian with 12 points, but as usual it was a team effort. Johnson and sophomore Braiden Blackwelder had 8 points each; Hemenway, Veenstra and junior Ethan Brooks had 7 each; and Plagerman added 6 points, 8 rebounds and 3 assists.

Carter Alberts, Cashmere’s 6-foot-6 junior center, towered over the shorter Trojans and had 15 points and 9 rebounds. “He was a huge difference,” said Stacy, probably both figuratively and literally.

But again, those are numbers.

“This is the finest group of young men I’ve ever been around,” said Stacy, who also praised their parents. “They’ve taught me a lot. And to regroup after we lost him is pretty cool.”

The “him” is Cameron Webster. And if you were wondering why only six names were listed for the seven seniors, it’s because Webster wasn’t on the court this season.

As a returning starter, he would have been there had he not broke his foot during football. Even though he missed the whole season, he was part of the team, sitting on the bench in his walking boot … that is when he wasn’t standing up cheering the Trojans’ every play.

That is what’s more important than numbers. And those seven seniors understand.

“Even though we won’t play together again,” said Hemenway, “we’re still brothers.”

Tournament tidbits: Webster was awarded the game’s sportsmanship medal for Meridian. … Short was named to the all-tournament second team.